The Krom wall facing this way was exposed to assault. It was called Pershi or Persi, from the old Russian word "persi" meaning "chest".

Pershi - wall was really chest of ancient Pskov city: stretching upwards for 20 meters from the bottom of a moat in the promontry called "Greblya".

Enemy forces stormed the Krom from this side, where there were no rivers to protect it. To defend the wall, the men of Pskov carved a moat in promontory. This moat was deep in ancient times and called the "Greblya", joined the Pskova and Velikaya rivers and was filled with water. 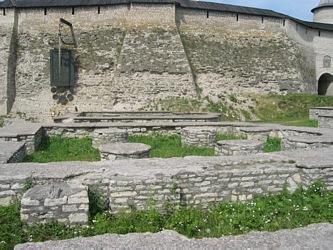 On the photos below is Dovmont Town. 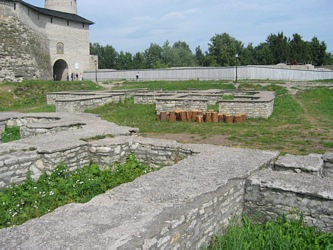 On the Wall in Dovmont town we can see now a sword and shield made by a modern Pskov's artist, the metal-sculptor, Vsevolod Smirnoff, and several small bells in honor of Prince Alexander Nevsky and victory over the Teutonic Knights at Chudskoye Lake in April 1242.

On the photo below is Sword and shield in honor of Prince Alexander Nevsky and Victory over the Teutonic Knights at Chudskoye Lake in April 1242. 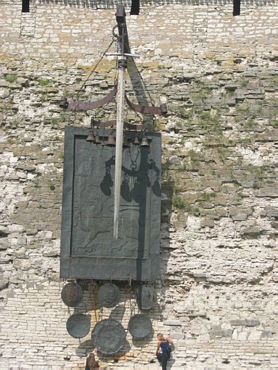